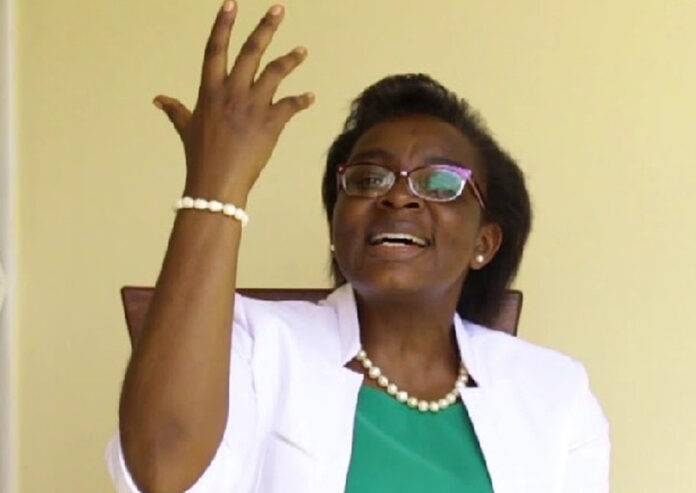 Victoire Ingabire was tried and convicted of complicity in acts of terrorism, conspiracy against the government by use of war and terrorism, and genocide ideology, and in October 2012 sentenced to eight years’ imprisonment. Fifteen months later, an appeal to the Supreme Court led to her sentence being increased to 15 years.

Since then some media, NGOs and intergovernmental organisations have struggled to sanitize her genocidaire background, and portray her as woman who is no more than a political opponent and head of a coalition of Rwandan opposition parties calling itself Unified Democratic Forces (UDF).

Three years ago an appeal case was filed by Ingabire against the Government Rwanda at the African Court on Human and Peoples’ Rights (ACHPR), marking yet another campaign to rebrand someone who is by all known definitions, a leading genocide ideologue and convicted terrorist planner.

Victoire Ingabire happened to be in the Netherlands before the Genocide against the Tutsi and remained there before she returned to Rwanda in January 2010. But her real story does not begin when she landed in Kigali, accompanied by her deputy who later confessed to genocide and is serving a prison sentence. It begins in the refugee camps of Zaire, now Eastern DRC, in which the remnants of Rwanda’s genocidal government settled after fleeing Rwanda. .

Her official narrative says that in August 2000 she was elected president of the Rally for the Return of Refugees and Democracy in Rwanda (RDR) – now known as the Republican Rally for Democracy in Rwanda – with its headquarters in The Hague. What her resume doesn’t say is that RDR was actually born in April 1995 in Mugunga Camp in Eastern DRC.

The original RDR that Ingabire prefers to shun, merged with other Hutu extremist ideologues to form her current party, United Democratic Forces (FDU-Inkingi). Although Ingabire masquerades as an opposition politician, the party she heads has genocide denial and genocide ideology as its founding doctrine.

In January 2010 Ingabire was reminded by the interviewer on a BBC Kinyarwanda language show “Imvo n’Imvano” that she was a member of an organization called the RDR created by “extremist Hutu” in the former Zaire. She denied it and instead said she was from a non-existent “Rally for Democracy in Rwanda.”

On 16 June 2006, the ICTR Appeals Chamber Judicial Notice stated that it was a “fact of common knowledge that between 6 April and 17 July 1994 there was a genocide in Rwanda against the Tutsi ethnic group” in which “more than a million people were killed during the genocide.”

But this and many more court rulings, have not stopped Ingabire and her colleagues from denying the obvious. A similar Judicial Notice of the Holocaust was made by Judge Johnson of the California Superior Court on 9th October 1981 ruling “The Holocaust is not reasonably subject to dispute…it is simply a fact.”

But the RDR to which Ingabire belongs and has led for over a decade, has maintained that “there is no evidence of the preparation of the genocide on the part of the Rwandan people and their leaders.” Rather, their position is: “it is true that massacres occurred and that the RPF must mainly be held responsible for the tragedy that befell Rwanda.”

The ICTR has ample evidence which shows who, when and how genocidaires were the real founders of the RDR. After all, many among them were eventually tried and convicted by the Court, including General Augustin Bizimungu, Colonels Theoneste Bagosora and Tharcisse Renzaho, Major Aloys Ntabakuze, Dr. Ferdinad Nahimana, Jean Bosco Barayagwiza and Laurent Semanza.

It is this very group that herded millions of ordinary Hutu citizens to refugee camps across the border to the DRC, and kept them as hostages for over two years and where the RDR provided political guidance to invigorate Hutu Power extremism.

Ingabire was schooled by these brains behind the genocide, the masterminds who fine-tuned the propaganda which justified and rationalized the slaughter, and provided training and logistics to the Tutsi extermination enterprise.

In May 1995, Human Rights Watch (HRW) published a report which described that part of the DRC was as a bastion of “the perpetrators of the Rwandan genocide” who had “openly declared their intent to return to Rwanda and …“kill all Tutsi…”. But the very same HRW condemned her trial which they said was “unfair” and used “unreliable” evidence. HRW conveniently failed to mention that some of the most damning evidence used by the prosecution was provided by the Netherlands.

Last year, the EU parliament arbitrarily raised her status to “political opponent”, and condemned her trial as “politically motivated…based on vague and imprecise laws”.

But if Victoire Ingabire had been in Europe as a “politician” and speaking of the Holocaust, the authorities of Austria, Belgium, Czech Republic, France, Germany, Lithuania, Poland, Romania, Slovakia, all countries with laws against denial would arrest and charge her.                     If there was evidence linking her to terrorist activity, she would be paraded on our TV screens as a threat to world peace. So, why Rwanda should be expected to hold itself to lower standards of memory and security?

By: Tom Ndahiro, a Genocide Scholar

Can the Law Protect a Witness?

ABOUT US
Internews Rwanda brings to you trustworthy news and information from the Rwandan community. We provide you with the latest breaking news and videos straight from Rwanda, the land of a thousand hills.
Contact us: info@internews.org.rw
FOLLOW US
© 2022 Internews Rwanda. All Rights Reserved.
MORE STORIES
Court

Can the Law Protect a Witness?