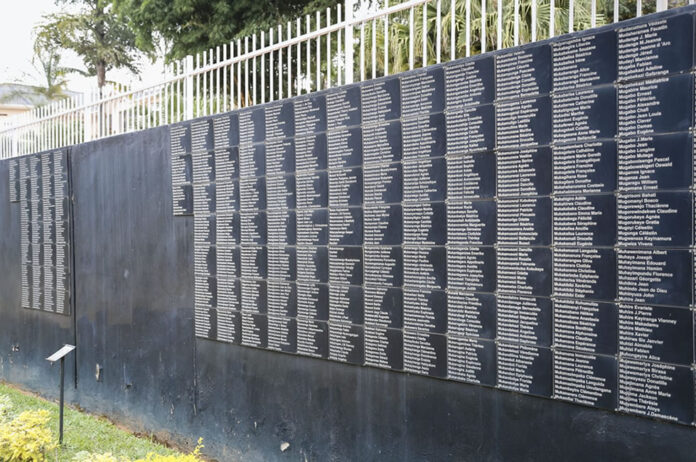 The group consists of people who are in one way or another connected to the perpetration of genocide. Some may have cases to answer for their involvement in the crime of genocide, some are genocide sympathisers, and others are simply venal, political opportunists who find personal gain in denying the Genocide

In a somewhat sickening irony, the group described itself as promoting peace and reconciliation and claimed to be representatives of the Rwanda Community in London in order to organize their event at St Ehrenburg’s centre for Reconciliation and Peace, in north London. At the last minute, the centre was alerted to the true character of the group and canceled the booking.

The group had tried several other venues, but, had been denied once the proprietors learned who they were. In impotent fury, one of the organisers, Rene Mugenzi, took to twitter to threaten the Rwanda High Commissioner to London, Yamina Karitanyi:  @YKaritanyi trying to export ur oppression beyond #Rwanda borders will undoubtedly backfire. U just dared a terrible mistake @PaulKgame

The themes for #Kwibuka23 is:  fight against genocide ideology and cherish the gains of the last twenty-three years. That venue in London, thousands of miles from Rwanda could see through the pretense of this group, is an encouraging sign that their true intent can no longer be hidden.

A close look at individuals within the group, and it’s not difficult to understand why they would organise an event to promote genocide denial. Rene Mugenzi is a self-styled “Human Rights/Political Activist”. His father Mr. Joseph Mugenzi is wanted for crimes of genocide. Aside from his assertion of being a ‘British community and social development practitioner,’ it is difficult to know what he does for a living.

His bedfellows include Vincent Bajinya, who for years hid under the alias Vincent Brown. Along with Charles Munyaneza, they are awaiting a case to decide their extradition to Rwanda to face trial on charges of crimes of genocide.

Other members of the group include the likes of Justin Bahunga, one of the founders of the hate radio RTLM, activists for the FDLR, a rebel group which has been indicted by the UN as a terrorist organisation, Peter Mutabaruka whose father Celestin Mutabaruka is a Genocide suspect fighting extradition in London, Marie Rose Namuhoza who is Rene Mugenzi’s wife and an FDU – Inkingi activist; Dr. Alexis Ndibwami a Genocide suspect and member of FDU – Inkingi, Epimaque Ntamushobora suspected of having participated in the killing of students at St. Andrew in Nyamirambo and RNC member.

Others involved in the efforts to deny Genocide are Faustin Rukundo and Dick Nyarwaya, both members of the RNC in the UK as well Jean-Pierre Nyampeta and Alphonse Niyibizi who are both advocates of FDLR in the UK.

As a reminder, the FDLR is made up of a combination of former Rwanda army personnel and the Interahamwe militias who speared headed the genocide to wipe out the Tutsi in 1994. They have been murdering, raping and pillaging their way across the Eastern Democratic Republic of Congo since 1994 and have been indicted by the UN as a terrorist organization

Groups such as the one led by Rene Mugenzi raise funds ostensibly to secure the release of Victoire Ingaibire, now imprisoned in Rwanda for genocide denial, but, the funds have been proven to finance FDLR terrorist activities. She had a fair trial, choosing her own lawyers from Canada, and it is unlikely that most people who contribute to these fund-raising efforts know of their real destination.

According to Gregory Stanton, there are eight stages of genocide, the last being genocide denial. It is this last stage in which the various groups mentioned above and individuals like disgraced priest Thomas Nahimana, who recently declared a “Rwanda government in exile” from France, are engaged.

In his speech delivered in London on 7th April 2017 at the commemoration of the Genocide against the Tutsi, journalist, and researcher, Dr. Andrew Wallis states, “The perpetrators had a strategy and it was simple: Deny the facts and divert the blame. “First, there was, of course, no genocide, only massacres. And in any such ‘massacres’ the killers were, in fact, the victims, the innocent, maligned party. It was Tutsis and moderate Hutus who had actually carried out the killing against them. Or, they persuaded those who would listen, both sides were killing each other so no side was responsible. And 1,000,000 Tutsis cannot have been killed because of clever and deeply flawed manipulation of statistics. And because an alleged perpetrator had a couple of Tutsi friends he cannot have done such terrible things as he/she loved and respected every Tutsi. They blamed everyone but themselves – the RPF, the Ugandans, the CIA and USA, the Belgians, the UK, Western NGOs”.

The perpetrators’ strategy is being employed by genocide deniers.

It would be easy to dismiss these events as the last ditch efforts of unrepentant criminal minds. This would, however, be a mistake.

These groups can count on support from not only the media (the BBC reported Nahimana’s government in exile, calling him an exiled Rwandan opposition politician), academia, and a number of commentators who inexplicably continue to support not only genocide sympathisers, but, the planners of the genocide themselves. To truly honour the victims of the Genocide against the Tutsi, it is vital for each of us to play our part to ensure this denial continues to be exposed for what it is: unscrupulous efforts to revise history and regain political legitimacy, for

As President Kagame said during his speech on the occasion of the 23rd Commemoration of the Genocide Against the Tutsi #Kwibuka23:

“There are others who are still struggling with trying to understand their responsibility and they are still on the course of trying to create problems for us around that. They have been doing that for the last 23 years now. But they won’t stop us making progress. They won’t. It doesn’t matter how powerful they think they are…

We are not asking for money. We don’t ask for money. There’s no money to compensate the lives of our one million people that were taken during this genocide. It’s the truth that we are after, the truth that allows people to live their full lives going forward.”