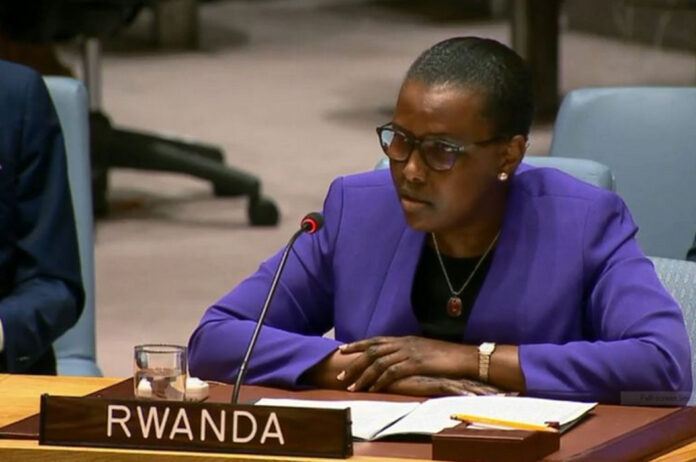 Survivors of the 1994 genocide against Tutsis in Rwanda and the government there are up in arms in reaction to plans by the UN tribunal set up to try genocide perpetrators (MICT), to actually instead release some of them. Rwanda has filed an official complaint with the UN Security Council where Russia is holding current presidency. In a session on Wednesday, Rwanda’s UN envoy Valentine Rugwabiza told the Council that it has to set up new operational mechanism for the UN tribunal. Bellow is the full submission by the Rwandan envoy.

I congratulate Russia upon assuming presidency of Security Council of June. I assure of Rwanda’s cooperation and active participation. I thank Judge Meron and Prosecutor Brammertz for their report and briefings.

This is a fitting occasion to assess the results and effectiveness of an important institution for international justice. In light of the magnitude of the challenges of justice in the post-genocide era in Rwanda, my government attaches great importance to a functioning international mechanism to reinforce our national and bilateral efforts in ensuring justice after the atrocious crimes of the 1994 Genocide against the Tutsi in Rwanda.

Indeed the ICTR was a pioneer in establishing a credible international criminal justice system. Some of its achievements, especially the verdicts it delivered in relation to rape and media as means of perpetrating genocide, are significant milestones for jurisprudence on genocide.

With these positive achievements in mind, it should be concerning to all that the legacy of the ICTR and the credibility of the Mechanism for International Criminal Tribunals (MICT) are seriously at stake. Since the MICT was established in 2012, it has released, before the end of their sentences, more than 10 masterminds of the Genocide against the Tutsi in Rwanda. These early releases have been granted in non-transparent circumstances and inconsistent procedure. It is worth noting that during the same period, the MICT was not able to apprehend and prosecute any of the remaining genocide fugitives.

Few weeks ago, to our surprise, the Government of Rwanda received for the first time from the President of the MICT a request for opinion on three additional applications for early releases of genocide convicts. We were surprised because, in the six years of existence of the MICT, the government has never received such request before. While we appreciate the opportunity to provide our opinion, which we did, this request from the MICT underlines the lack of transparency and the inconsistency we have been denouncing for a long time. It also demonstrates that the decision not to seek the opinion of the Government of Rwanda or the associations of the victims in previous cases was the personal discretion of the President of the MICT. Indeed, one may ask what allowed the MICT to seek our opinion this time while the rules of procedure, have remained unchanged.

I would like to elaborate on what we perceive as a credibility crisis on the MICT when it comes to the issue of early releases. Let me make it clear that Rwanda is not against the principle of early release. We believe that the purpose of incarceration is to rehabilitate individuals. No national jurisdictions to date have reduced and/or released more convicts of genocide before the end of their sentences than Rwanda did. The problem lies in the lack of transparency and accountability in the process used by the MICT to consider and effect early releases. The decisions have been solely made by the MICT President. The Government of Rwanda and associations of the victims and survivors have learnt about his
decisions in the media.

We wonder the criteria considered given the gravity of the crimes committed by the convicts and their lack of remorse. A number of convicts released before the end of their sentences have since regrouped and organized themselves in an association denying the 1994 Genocide against the Tutsi and propagating the genocide ideology. They are free to undertake such criminal activities without fear of consequences because they were released without conditions. This is an inescapable part of the legacy of the current President of the MICT.

I would like to point to three best practices from the UN Special Court for Sierra Leone, which are outlined in the ‘Practice Direction on the Conditional Early Release of Person’s Convicted by the Special Court for Sierra Leone’ issued on 1st October 2013. These best practices provide a robust set of accountability mechanisms that this council should advise the MICT to consider:

The first practice is under the eligibility criteria for consideration for conditional early release. The ‘Special Court’ requires that to be eligible for early release, a convict has to prove ‘positive contribution to peace and reconciliation in Sierra Leone’ such as ‘public acknowledgement of guilt, public support for peace projects, public apology to victims, or victim restitution’. Mr. President, the individuals being released by MICT are well known to deny the historical facts of the Genocide against the Tutsi in Rwanda. How is it that such individuals are deemed fit for early release?

The second practice is that the ‘Special Court’ has stringent requirements for supervision, restitution to victims, and renunciation of ideologies contrary to peace and reconciliation, and proposed areas of resettlement. We believe that such elements are lacking in the MICT process of determining eligibility for early release. Yet these are reasonable accountability mechanisms that need to be in place to ensure that released convicts do not re-engage in criminal activities.

Thirdly, the ‘Special Court’ requires that witnesses, victims, the Government of the Home State and representatives of requested areas of release are all informed and engaged regarding early releases. In particular, these actors have the opportunity to provide their opinion on requests for early releases prior to the court’s decision.

Rwanda has shared her concerns in various interactions with the MICT President and Prosecutor. No change has been effected in the rules of procedure for early release to date. We are aware of the constructive attempts by a number of judges to amend the current rules with stronger provisions of accountability and obligations of transparency. However, we regret the current paralysis in the MICT on this issue.

In conclusion, allow me to submit two suggestions to this august
council;

1. The MICT should be urged to put in place clear rules of procedure for early release and apply them transparently instead of leaving the decision of early release to the personal discretion of the current or future President of the MICT. The credibility of the MICT and its legacy and contribution to the fight against impunity for crimes of genocide are at stake;

2. Second, rules of procedures to be put in place should include conditionalities to prevent genocide convicts benefiting from early releases from engaging in activities promoting genocide ideology and denial. Here again, the rules of procedure of the Special Court of Sierra Leone can serve as best practices. I thank the Council for this opportunity to express our concerns.

I thank you, Mr. President.