It had been planned that Rwanda gets one of its first railway routes from Kenya via Uganda. But for reasons unknown, Uganda dropped the Kenya project – essentially killing Rwanda’s hopes for a line that would boost its economy.

The standard gauge railway (SGR) was agreed between Uganda, Kenya and Rwanda – that it would move from Mombasa-Nairobi-Kisumu-Malaba (Kenya) on to Kampala (Uganda), which would be extended to Kigali,Rwanda. Burundi and eastern DR Congo were to tap from the project once the line reached Kigali.

Kenya for its part committed to build the line inside its territory up to Kisumu. Uganda would then collaborate with Kenya to extend it to Malaba border. But in late 2016, Uganda went against its commitment – instead affirming that Kenya had the obligation to extend to Malaba, or else it would not support Kenya to get financing from China for the whole project.

Uganda finance minister Matia Kasaija later told Bloomberg news in May 2017 that China’s Export-Import Bank will only fund the project if Kenya extends its line to the border, Malaba.

In other words, the Uganda government was telling the Kenyans that they had no other option but do as wished. Kenya was not moved, as it eventually secured financing for its own SGR, some sections of which are already operational today.

After killing the Kenya route, Uganda moved its line to Tanzania. The new line will connect Uganda via Port Bell all through to Musoma port on Lake Victoria to Tanga port on the Indian Ocean, and the Central Corridor via the Mwanza/Bukoba ports on Lake Victoria to the Dar es Salaam port. This section is already under construction as we write this piece.

Amidst this regional jockeying, Rwanda was left out in the cold. However, Rwanda had planned for two railway projects – another being Dar es Salaam to Isaka (Tanzania), then on to Kigali.

With the Mombasa-Kigali railway dead, the government of President Paul Kagame had to make the Tanzania route work. More than 50% of Rwanda’s imports enter through Tanzania’s ports.

Yesterday on Sunday, at an impromptu one-day state visit to Dar es Salaam, Kagame and Tanzanian counterpart John Pombe Magufuli put pen to paper for the 407km Isaka-Kigali route. Construction begins any moment from now, as the leaders agreed that the “foundation stone” should be laid this year.

Tanzania has already started construction of its standard gauge railway in two phases from Dar es Salaam to Morogoro covering 330 km, and from Morogoro to Makutupora in Dodoma covering 426km, using locally sourced funds to the tune of about US$3 billion.

The standard gauge is wider, and therefore faster and capable of carrying heavier loads. 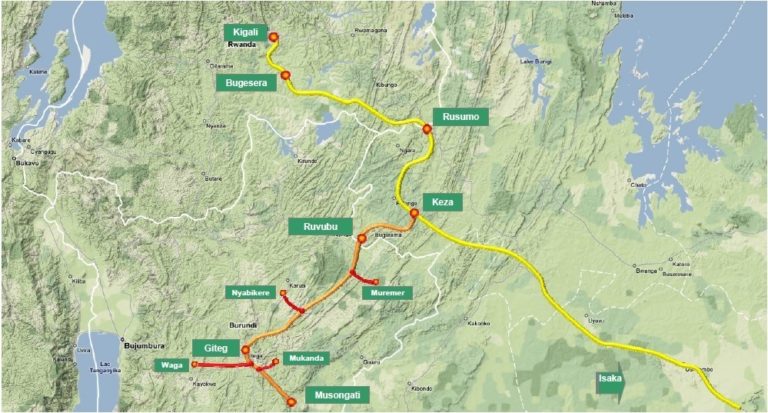 High transport costs in East Africa have been cited as a serious challenge to the Rwanda’s ability to compete effectively with the rest of its much bigger neighbours. For instance, importers say it costs Rwanda on average $4,990 to import a 20ft container while the sub-Saharan average is $2,504, which makes the country uncompetitive in cross-border trade.

When goods reach Rwanda, they are double the retail price in Tanzania, Uganda or Kenya.

The African Development Bank (AfDB) will finance Tanzania’s central railway projects estimated at US$7.6billion – linking up to the Rwandan border. China was to finance the SGR, but pulled out when contracts were awarded to Turkey and Portugal.

Rwanda will build its railways from scratch as there is no existing line.
Either coincidentally, or by design, China’s foreign minister Wang Yi was in Kigali on Saturday. Wang’s trip takes him to Angola, Gabon and Sao Tome and Principe.

Following their talks, Kagame, who is 2018 African Union chairman beginning this January said Africa trusts China and is willing to see China playing a more important role on the continent.

Meanwhile, Uganda also killed plans for a regional oil pipeline from Kenya, Uganda to Rwanda. The pipeline was to pump concurently pump exports out of Uganda and Kenya through Kenyan ports, and also bring in oil imports into Rwanda – and ofcourse Burundi and eastern DRC.

Even without the pipeline, but with an SGR operational, Rwanda will not have to depend on the costly trailers ferrying oil products from Kenya.

All will be readily available cheaply on rails from Tanzania.

ABOUT US
Internews Rwanda brings to you trustworthy news and information from the Rwandan community. We provide you with the latest breaking news and videos straight from Rwanda, the land of a thousand hills.
Contact us: info@internews.org.rw
FOLLOW US
© 2022 Internews Rwanda. All Rights Reserved.
MORE STORIES
Business